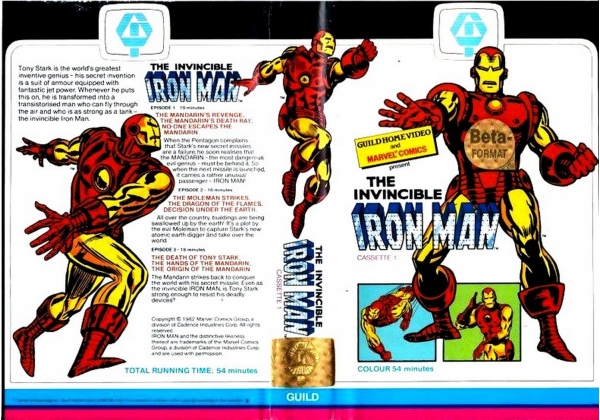 Sleeve Sypnosis:
Tony Stark is the world's greatest inventive genius - his secret invention is a suit of armour equipped with fantastic jet power. Whenever he puts this on, he is transformed into a transistorised man who can fly through the air and who is as strong as a tank - the invincible Iron Man.

EPISODE 1 - 18 minutes. THE MANDARIN'S REVENGE, THE MANDARIN'S DEATH RAY, NO-ONE ESCAPES THE MANDARIN. When the Pentagon complains that Stark's new secret missiles are a failure, he soon realises that the MANDARIN - the most dangerous evil genius - must be behind it. So when the next missile is launched, it carries a rather unusual passenger.

IRON MAN! EPISODE 2 - 18 minutes. THE MOLEMAN STRIKES, THE DRAGON OF THE FLAMES, DECISION UNDER THE EARTH. All over the country, buildings are being swallowed up by the earth! It's a plot by the evil Moleman to capture Stark's new atomic earth digger and take over the world.

EPISODE 3 - 18 minutes. The Mandarin strikes back to conquer the world with his secret missile. Even as the invincible IRON MAN, is Tony Stark strong enough to resist his deadly devices?

Or find "Invincible Iron Man, The - Cassette 1" on VHS and DVD / BluRay at Amazon.