Inn of the Sixth Happiness, The (widescreen) (1958)
Fox Video 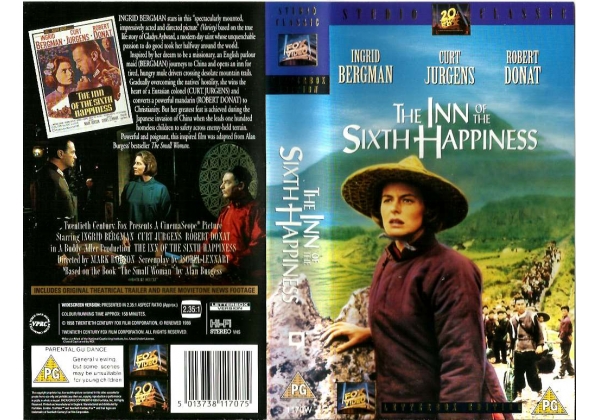 Sleeve Sypnosis:
INGRID BERGMAN stars in this "spectacularly mounted, impressively acted and directed picture" (Variety) based on the true life story of Gladys Aylward, a modern day saint whose unquenchable passion to do good took her halfway around the world. Inspired by her dream to be a missionary, an English parlour maid (BERGMAN) journey's to China and opens an inn for tired, hungry mule drivers crossing desolate mountain trails. Gradually overcoming the natives' hostility, she wins the heart of a Eurasian colonel (CURT JURGENS) and converts a powerful mandarin (ROBERT DONAT) to Christianity. But her greatest feat is achieved during the Japanese invasion of China when she leads one hundred homeless children to safety across enemy-held terrain. Powerful and poignant, this inspired film was adapted from Alan Burgess' bestseller The Small Woman.