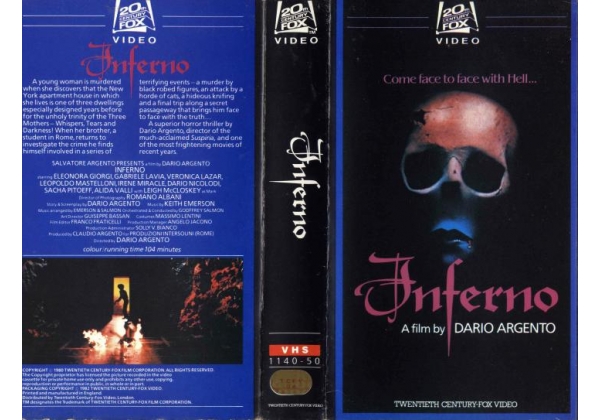 Sleeve Sypnosis:
A young woman is murdered when she discovers that the New York apartment house in which she lives is one of three dwellings especially designed years before for the unholy trinity of the Three Mothers - Whispers, Tears and Darkness! When her brother, a student in Rome, returns to investigate the crime he finds himself involved in a series of terrifying events - a murder by black robed figures, an attack by a horde of cats, a hideous knifing and a final trip along a secret passageway that brings him face to face with the truth... A superior horror thriller by Dario Argento, director of the much-acclaimed Suspiria, and one of the most frightening movies of recent years.

Or find "Inferno" on VHS and DVD / BluRay at Amazon.