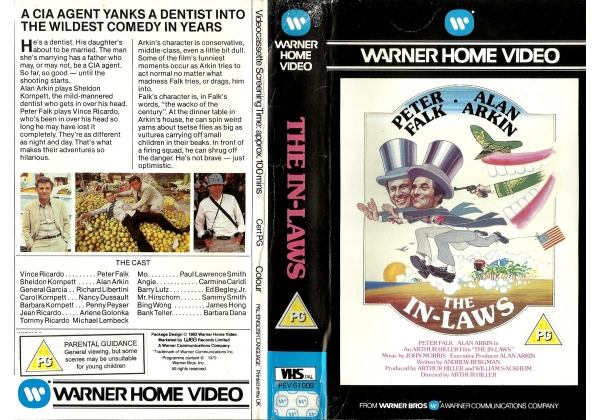 Sleeve Sypnosis:
A CIA AGENT YANKS A DENTIST INTO THE WILDEST COMEDY IN YEARS

He's a dentist.His daughter's about to be married. The man she's marrying has a father who may, or may not, be a CIA agent. So far, so good - until the shooting starts. Alan Arkin plays Sheldon Kornpett, the mild mannered dentist who gets in over his head. Peter Falk plays Vince Ricardo, who's been in over his head so long he may have lost it completely. They're as different as night and day. That's what makes their adventures so hilarious. Arkin's character is conservative, middle-class, even a little bit dull. Some of the film's funniest moments occur as Arkin tries to act normal no matter what madness Falk tries, or drags, him into. Falk's character is, in Falk's words, "the wacko of the century". At the dinner table in Arkin's house, he can spin weird yarns about tsetse files as big as vultures carrying off small children in their beaks. In front of a firing squad, he can shrug off the danger. He's not brave - just optimistic.

Or find "In-Laws, The" on VHS and DVD / BluRay at Amazon.