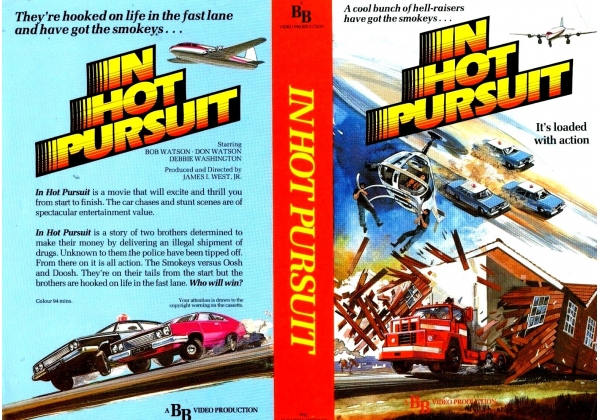 Sleeve Sypnosis:
A cool bunch of hell-raisers have got the smokeys... IN HOT PURSUIT.

It's loaded with action

They're hooked on life in the fast lane and have got the smokeys...

IN HOT PURSUIT In Hot Pursuit is a movie that will excite and thrill you from start to finish. The car chases and stunt scenes are of spectacular entertainment value. In Hot Pursuit is a story of two brothers determined to make their money by delivering an illegal shipment of drugs. Unknown to them the police have been tipped off. From there on it is all action. The Smokeys versus Oosh and Doosh. They're on their tails from the start but the brothers are hooked on life in the fast lane. Who will win?

Or find "In Hot Pursuit" on VHS and DVD / BluRay at Amazon.