In God We Trust
CIC Video 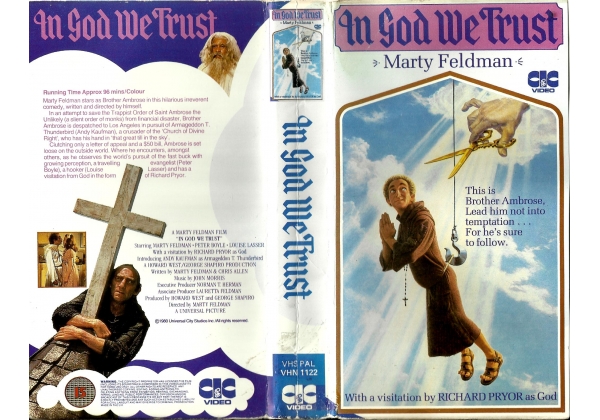 Sleeve Sypnosis:
This is Brother Ambrose, Lead him not into temptation...
For he's sure to follow.

With a visitation by RICHARD PRYOR as God

Marty Feldman stars as Brother Ambrose in this hilarious irreverant comedy, written and directed by himself. In an attempt to save the Trappist Order of Saint Ambrose the Unlikely (a silent order of monks) from financial disaster, Brother Ambrose is dispatched to Los Angeles in pursuit of Armaggedon T. Thunderbird (Andy Kaufman), a crusader of the 'Church of Divine Right', who has his hand in 'that great till in the sky'. Clutching only a letter of appeal and a $50 bill, Ambrose is set loose on the outside world. Where he encounters, amongst others, as he observes the world's pursuit of the fast buck with growing preception, a travelling eveangelist (Peter Boyle), a hooker (Louise Lasser) and has a visitation from God in the form of Richard Pryor.

In God We Trust

Or find "In God We Trust" on VHS and DVD / BluRay at Amazon.