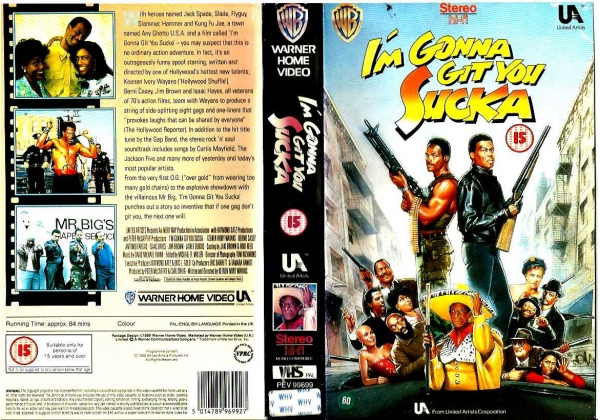 Sleeve Sypnosis:
With heroes named Jack Spade, Slade, Flyguy, Slammer, Hammer and Kung Fu Joe, a town named Any Ghetto U.S.A. and a film called 'I'm Gonna Get You Sucka' - you may suspect that this is no ordinary action adventure. In fact, it's an outrageously funny spoof starring, written-and directed by one of Hollywood's hottest new talents; Keenan Ivory Wayans ('Hollywood Shuffle'). Berni Casey, Jim Brown and Isaac Hayes, all veterans of 70's action films, team with Wayans to produce a string of side-splitting sight gags and one-liners that "provokes laughs that can be shared by everyone" (The Hollywood Reporter). In addition to the hit title tune by Gap Band, the stereo rock 'n' soul soundtrack includes songs by Curtis Mayfield, The Jackson Five and many more of yesterday and today's most popular artists. From the very first O.G. ("over gold" from wearing too many gold chains) to the explosive showdown with the villainous Mr Big, 'I'm Gonna Get You Sucka' punches out a story so inventive that if one gag don't git you, the next one will.

I'm Gonna Get You Sucka

Or find "I'm Gonna Get You Sucka" on VHS and DVD / BluRay at Amazon.