I Spit on Your Grave
Astra 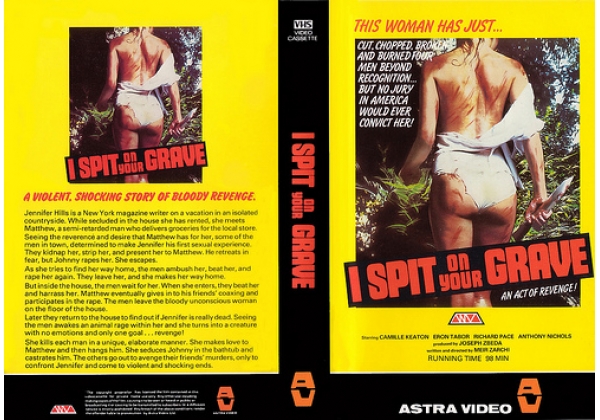 Sleeve Sypnosis:
This woman has just... cut, chopped, broken and burned four men beyond recognition... but no jury in America would ever convict her!
Jennifer Hills is a New York magazine writer on a vacation in an isolated countryside. While secluded in the house she has rented, she meets Matthew, a semi-retarded man who delivers groceries for the local store. Seeing the reverence and desire that Matthew has for her, some of the men in town, determined to make Jennifer his first sexual experience. They kidnap her, strip her, and present her to Matthew. He retreats in fear, but Johnny rapes her. She escapes. As she tries to find her way home, the men ambush her, beat her, and rape her again.

They leave her, and she makes her way home. But inside the house, the men wait for her. When she enters, they beat her and harrass her. Matthew eventually give in to his friends' coaxing and participates in the rape. The men leave the bloody unconscious woman on the floor of the house. Later they return to the house to find out if Jennifer is really dead. Seeing the men awakes an animal rage within her and she turns into a creature with no emotions and only one goal... revenge! She kills each man in a unique, elaborate manner.

She makes love to Matthew and then hangs him. She seduces Johnny in the bathtub and castrates him. The others go out to avenge their friends' murders, only to confront Jennifer and come to violent and shocking ends.

I Spit on Your Grave

Or find "I Spit on Your Grave" on VHS and DVD / BluRay at Amazon.