I Am a Dancer
Thorn EMI 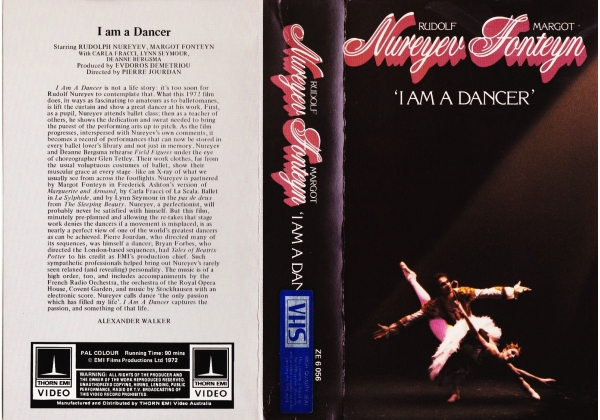 Sleeve Sypnosis:
I Am A Dancer is not a life story: it's too soon for Rudolf Nureyev to contemplate that. What this 1972 film does, in ways as fascinating to amateurs as to balletomanes, is lift the curtain and show a great dancer at his work. First, as a pupil, Nureyev attends ballet class; then, as a teacher of others, he shows the dedication and sweat needed to bring the purest of the performing arts up to pitch. As the film progresses, interspersed with Nureyev's own comments, it becomes a record of performances that can now be stored in every ballet lover's library and not just in memory. Nureyev and Deanne Bergsma rehearse Field Figures under the eye of choreographer Glen Tetley. Their work clothes, far from the usual voluptuous costumes of ballet, show their muscular grace at every stage - like an X-ray of what we usually see from across the footlights. Nureyev is partnered by Margot Fonteyn in Frederick Ashton's version of Marguerite and Armand, by Carla Fracci of La Scala Ballet in La Sylphide, and by Lynn Seymour in the pas de deux from The Sleeping Beauty. Nureyev, a perfectionist, will probably never be satisfied with himself. But this film, minutely pre-planned and allowing the re-takes that stage work denies the dancers if a movement is misplaced, is as nearly a perfect view of one of the world's greatest dancers as can be achieved. Pierre Jourdan, who directed many of its sequences, was himself a dancer; Bryan Forbes, who directed the London-based sequences, had Tales of Beatrix Potter to his credit as EMI's production chief. Such sympathetic professionals helped bring out Nureyev's rarely seen relaxed (and revealing) personality. The music is of a high order, too, and includes accompaniments by the French Radio Orchestra, the orchestra of the Royal Opera House, Covent Garden, and music by Stockhausen with an electronic score. Nureyev calls dance 'the only passion which has filled my life'. I Am A Dancer captures the passion, and something of that life.

I Am a Dancer

Or find "I Am a Dancer" on VHS and DVD / BluRay at Amazon.