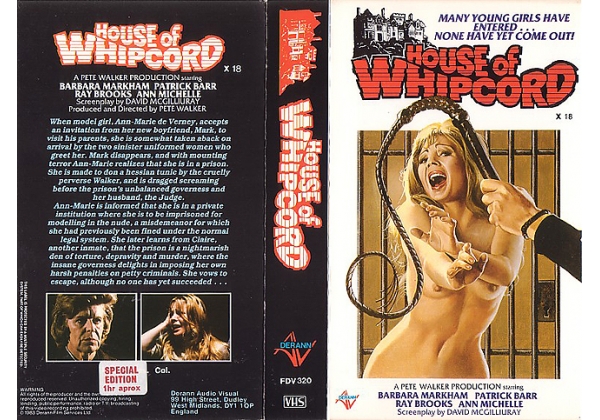 Sleeve Sypnosis:
MANY YOUNG GIRLS HAVE ENTERED... NONE HAVE YET TO COME OUT!
When model girl, Ann-Marie de Verney, accepts an invitation from her new boyfriend, Mark, to visit his parents, she is somewhat taken aback on arrival by the two sinister uniformed women who greet her. Mark disappears, and with mounting terror Ann-Marie realizes that she is in a prison. She is made to don a hessian tunic by the cruelly perverse Walker, and is dragged screaming before the prison's unbalanced governess and her husband, the Judge. Ann-Marie is informed that she is in a private institution where she is to be imprisoned for modelling in the nude, a misdemeanor for which she had previously been fined under the normal legal system. She later learns from Claire, another inmate, that the prison is a nightmarish den of torture, depravity and murder, where the insane governess delights in imposing her own harsh penalties on petty criminals. She vows to escape, although no one has yet succeeded...

Or find "House of Whipcord" on VHS and DVD / BluRay at Amazon.