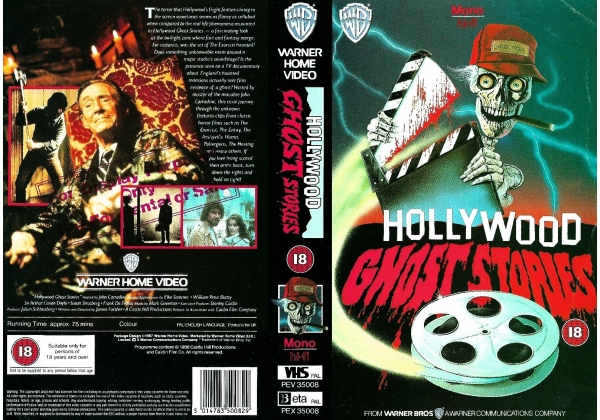 Sleeve Sypnosis:
The terror that Hollywood's fright features bring to the screen sometimes seems as flimsy as celuloid when compared to the real life phenomena recounted in Hollywood Ghost Stories - a fascinating look at the twilight zone where fact and fantasy merge. For instance, was the set of The Exorcist haunted? Does something unnkowable roam aound major studio's soundstage? Is the presence seen on a TV documentary about England's haunted mansions actually rare film evidence of a ghost? Hosted by master of the macarbe John Carradine, this eerie journey through the unknown features clips from classic horror films such as The Exorcist, The Entity, The Amityville Horror, Poltegeist, The Nesting and many others. If you love being scared then settle back, turn down the lights and hold tight!

Or find "Hollywood Ghost Stories" on VHS and DVD / BluRay at Amazon.