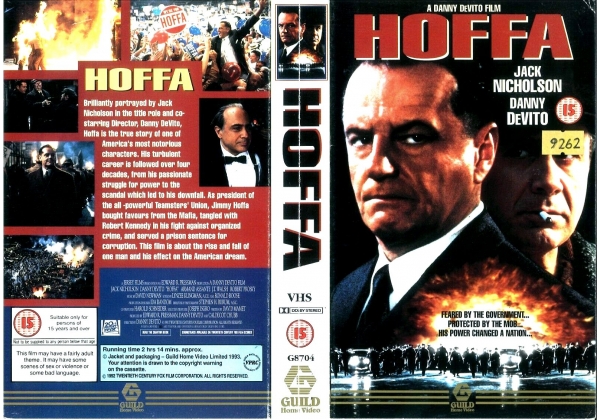 Sleeve Sypnosis:
FEARED BY THE GOVERNMENT...
PROTECTED BY THE MOB...
HIS POWER CHANGED A NATION...

Brilliantly portrayed by Jack Nicholson in the title role and co-starring Director, Danny Devito, Hoffa is the true story of one of America's most notorious characters. His turbulent career is followed over four decades, from his passionate struggle for power to the scandal which led to his downfall.

As president of the all-powerful Teamsters' Union, Jimmy Hoffa bought favours from the Mafia, tangled with Robert Kennedy in his fight against organized crime, and served a prison sentence for corruption. This film is about the rise and fall of one man and his effect on the American dream.

Or find "Hoffa" on VHS and DVD / BluRay at Amazon.