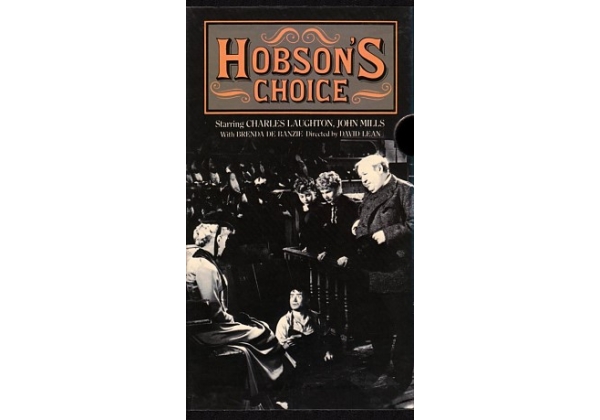 Sleeve Sypnosis:
Hobson's Choice (1954) was based on the lively comedy by Harold Brighouse, set in 1890's Lancashire. Charles Laughton gives a tour de force performance as Hobson the tyrannical widower with a fondness for alcohol. He provides some gloriously comic moments, as on the occasion he drunkenly chases the moon from puddle to puddle. Brenda de Banzie plays the strong-minded Maggie, the plain but clever eldest daughter, who, her sisters assume, will conveniently stay unmarried and look after their father and his shop. Maggie, however, has a different future in mind for herself and announces her intention to marry Willie Mossop, much to the consternation of all concerned, including the prospective bridegroom. John Mills plays the excessively timid boothand who makes the best shoes in the district. Maggie decides that once they are married they are to set up in business on their own, and once Maggie has made up her mind nothing can sway her from her course. But the marriage proves to be much more than a business merger and the love affair between the two is developed with tenderness and humour. Hobson's Choice then is the Taming of the Shrew in reverse as the task of embolding the mild Willie is embarked upon. The director has coaxed some finely judged acting not only from the three leads; he also makes admirable use of the excellent supporting cast which includes Prunella Scales and John Laurie. Thanks to the great care taken to create authentic sets, such as the living quarters at the back of Hobson's shop or the slum streets of Salford, the film strongly evokes the feeling of life in a Northern town in the 1890's. Director David Lean, now better known for epics such Dr Zhivago and Lawrence of Arabia, has woven all the various elements with intelligence and warmth and the end product is a sheer delight.