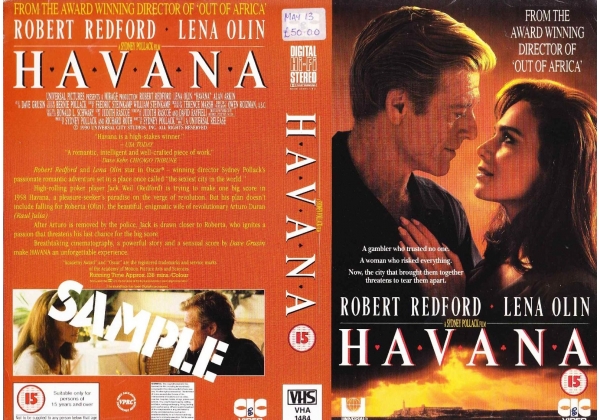 Sleeve Sypnosis:
FROM THE AWARD WINNING
DIRECTOR OF 'OUT OF AFRICA'

A gambler who trusted no one.

A woman who risked everything.

Now, the city that brought them together theatens to
tear them apart.

High-rolling poker player Jack Weil (Redford) is trying to make one big score in 1958 Havana, a pleasure-seeker's paradise on the verge of revolution. But his plan doesn't include falling for Roberta (Olin), the beautiful,enigmatic wife of revolutionary Arturo Duran (Raul Julia).

After Arturo is removed by the police, Jack is drawn closer to Roberta, who ignites a passion that threatens his last chance for the big score. Breathtaking cinematography, a powerful story and a sensual score by Dave Grusin make HAVANA an unforgettable experience.

Or find "Havana" on VHS and DVD / BluRay at Amazon.