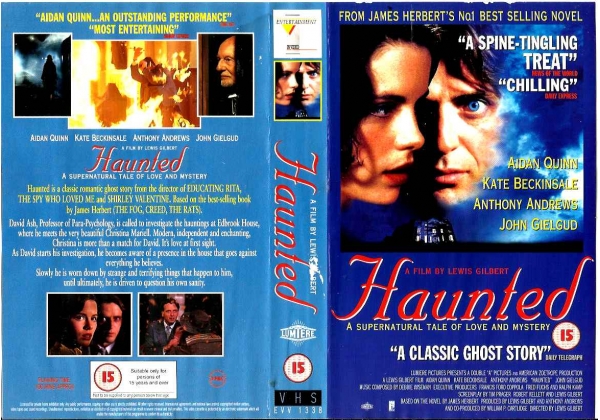 Sleeve Sypnosis:
Haunted is a classic romantic ghost story from the director of EDUCATING RITA, THE SPY WHO LOVED ME and SHIRLEY VALENTINE. Based on the best-selling book by James Herbert (THE FOG, CREED, THE RATS).

David Ash, Professor of Para-Psychology, is called to investigate the hauntings at Edbrook House, where he meets the very beautiful Christina Mariell. Modern, independent and enchanting, Christina is more than a match for David. It's love at first sight.

As David starts his investigation, he becomes aware of a presense in the house that goes against everything he believes. Slowly he is worn down by strange and terrifying things that happen to him, until ultimately, he is driven to question his own sanity.

Or find "Haunted" on VHS and DVD / BluRay at Amazon.