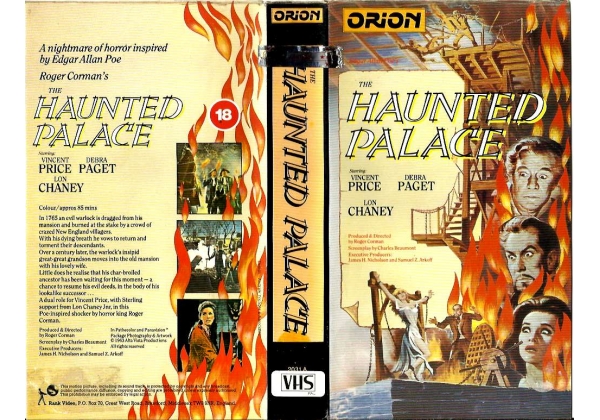 Sleeve Sypnosis:
In 1765 an evil warlock is dragged from his mansion and burned at the stake by a crowd of crazed New England villagers. With his dying breath he vows to return and torment their descendants. Over a century later, the warlock's insipid great-great grandson moves into the old mansion with is lovely wife. Little does he realise that his char-broiled ancestor has been waiting for this moment - a chance to resume his evil deeds, in the body of his lookalike successor... A dual role for Vincent Price, with Sterling support from Lon Chaney Jnr, in this Poe-inspired shocker by horror king Roger Corman.

Orion
Cat No:
2031A
Distributor
Rank

Or find "Haunted Palace, The" on VHS and DVD / BluRay at Amazon.