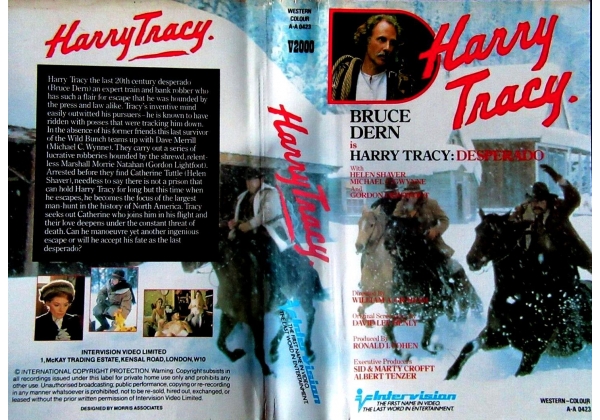 Sleeve Sypnosis:
Harry Tracy the last 20th century desperado (Bruce Dern) an expert train and bank robber who has such a flair for escape that he was hounded by the press and law alike. Tracy's inventive mind easily outwitted his pursuers-he is known to have ridden with posses that were tracking him down In the absence of his former friends this last survivor of the Wild Bunch teams up with Dave Merrill (Michael C. Wynne).

They carry out a series of lucrative robberies hounded by the shrewd, relent- less Marshall Morrie Natahan (Gordon Lightfoot) Arrested before they find Catherine Tuttle (Helen Shaver), needless to say there is not a prison that can hold Harry Tracy for long but this time when he escapes, he becomes the focus of the largest man-hunt in the history of North America. Tracy seeks out Catherine who joins him in his flight and their love deepens under the constant threat of death. Can he manoeuvre yet another ingenious escape or will he accept his fate as the last desperado?

Or find "Harry Tracy" on VHS and DVD / BluRay at Amazon.