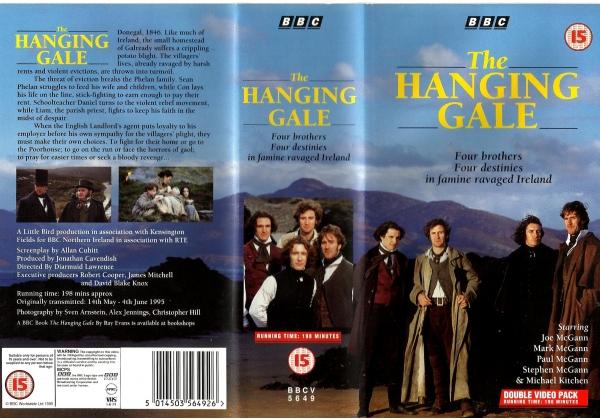 Donegal, 1846. Like much of Ireland, the small homestead of Galeady suffers a crippling potato blight. The villagers' lives, already ravaged by harsh rents and violent evictions, are thrown into turnmoil. The threat of eviction breaks the Phelan family. Sean Phelan struggles to feed his wife and children, while Con lays his life on the line, stick-fighting to earn enough to pay their rent. Schoolteacher Daniel turns to the violent rebel movement, while Liam, the parish priest, fights to keep his faith in the midst of despair.

When the English Landlord's agent puts loyality to his employer before his own sympathy for the villager's plight, they must make their own choices. To fight for their home or go to the Poorhouse; to go on the run or face the horrors of gaol; to pray for easier times or seek a bloody revenge.

Or find "Hanging Gale, The" on VHS and DVD / BluRay at Amazon.