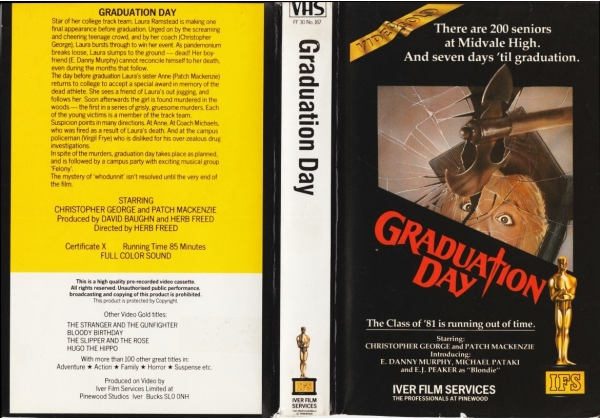 Sleeve Sypnosis:
There are 200 seniors at Midvale High. And seven days 'til graduation. The Class of '81 is running out of time.
Star of her college track team, Laura Ramstead is making one final appearance before graduation. Urged on by the screaming and cheering teenage crowd, and by her coach (Christopher George), Laura bursts through to win her event. As pandemonium breaks loose, Laura slumps to the ground - dead! Her boy-friend (E. Danny Murphy) cannot reconcile himself to her death, even during the months that follow. The day before graduation Laura's sister Anne (Patch Mackenzie) returns to college to accept a special award in memory of the dead athlete. She sees a friend of Laura's out jogging, and follows her.

Soon afterwards the girl is found murdered in the woods - the first in a series of grisly, gruesome murders. Each of the young victims is a member of the track team. Suspicion points in many directions. At Anne. At Coach Michaels, who was fired as a result of Laura's death. And at the campus policeman (Virgil Frye) who is disliked for his over-zealous drug investigations. In spite of the murders, graduation day takes place as planned, and is followed by a campus party with exciting musical group 'Felony'. The mystery of 'whodunnit' isn't resolved until the very end of the film.

Or find "Graduation Day" on VHS and DVD / BluRay at Amazon.