Good Man in Africa, A
Universal 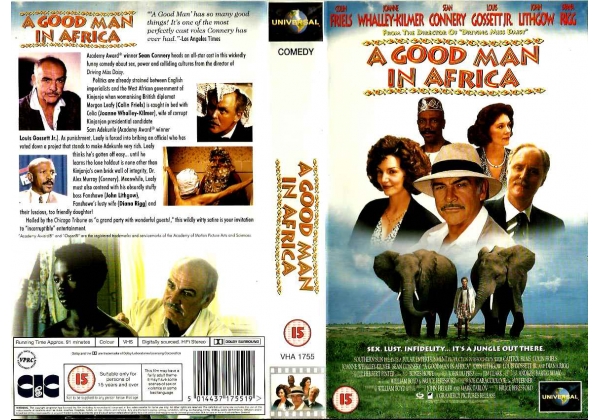 Sleeve Sypnosis:
"A Good Man' has so may good things! It's one of the most perfectly cast roles Connery has ever had. " - Los Angeles Times

Politics are already strained between English imperialists and West African government of Kinjanja when womanising British diplomat Morgan Leafy (Colin Friels) is caught in bed with Celia (Joanne Whalley-Kilmer), wife of corrupt Kinjanjan presidential candidate Sam Adekunle (Academy Award® winner Louis Gossett Jr.). As punishment, leafy is forced to into bribing an official who has voted down a project that stands to make Adekunle very rich.

Leafy thinks he's gotten off easy...until he learns the lone holdout is none other than Kinjanja's own brick wall of integrity, Dr. Alex Murray (Connery). Meanwhile, Leafy must also contend with his absurdly stuffy boss Fanshawe (Lithgow), Fanshawe's lusty wife (Diana Rigg) and their luscious, too friendly daughter!

Hailed by the Chicago Tribune as "a grand party with wonderful guests!," this wildly witty satire is your invitation to "incorrruptable " entertainment.

Good Man in Africa, A

Or find "Good Man in Africa, A" on VHS and DVD / BluRay at Amazon.