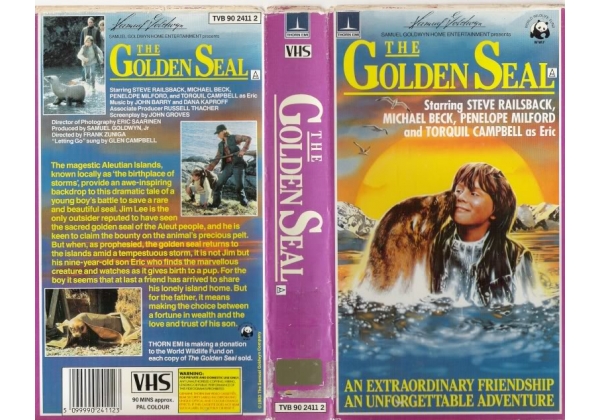 Sleeve Sypnosis:
AN EXTRAORDINARY FRIENDSHIP. AN UNFORGETTABLE ADVENTURE
The magestic Aleutian Islands, known locally 'the birthplace of storms', provide an awe-inspiring backdrop to this dramatic tale of a young boy's battle to save a rare and beautiful seal. Jim Lee is the only outsider reputed to have seen the sacred golden seal of the Aleut people, and he is keen to claim the bounty on the animal's precious pelt. But when, as prophesied, the golden seal returns to the islands amid a tempestuous storm, it is not Jim but his nine-year-old son Eric who finds the marvellous creature and watches as it gives birth to a pup. For the boy it seems that at last a friend has arrived to share his lonely island home. But for the father it means making the choice between a fortune in wealth and the love and trust of his son.

THORN EMI is making a donation to the World Wildlife Fund on each copy of The Golden Seal sold.

Or find "Golden Seal, The" on VHS and DVD / BluRay at Amazon.