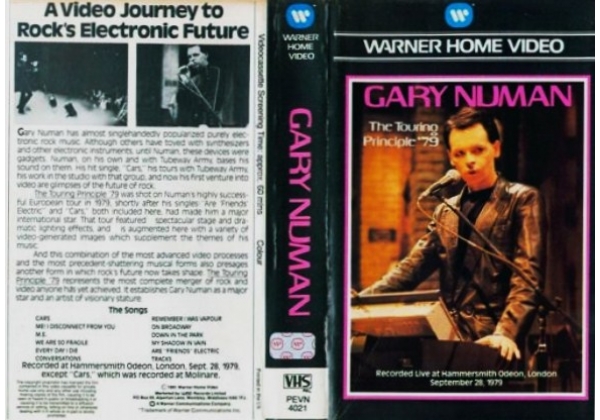 Sleeve Sypnosis:
A Video Journey to Rock's Electronic Future. Gary Numan has almost singlehandedly popularized purely electronic rock music. Although others have toyed with synthesizers and other electronic instruments, until Numan, these devices were gadgets. Numan, on his own and with Tubeway Army, bases his sound on them. His ht single, "Cars", his tours with Tubeway Army, his work in the studio with that group, and now his first venture into video are glimpses of the future of rock. The Touring Principle '79 was shot on Numan's highly successful European tour in 1979, shortly after his singles "Are 'Friends' Electric" and "Cars", both included here, had made him a major international star. That tour featured spectacular stage and dramatic lighting effects, and is augmented here with a variety of video-generated images which supplement the themes of his music. And this combination of the most advanced video processes and the most precedent-shattering musical forms also presages another form in which rock's future now takes shape. The Touring Principle '79 represents the most complete merger of rock and video anyone has yet achieved. It establishes Gary Numan as a major star and an artist of visionary stature. Recorded at Hammersmith Odeon, London, Sept. 28, 1979, except "Cars", which was recorded at Molinare.