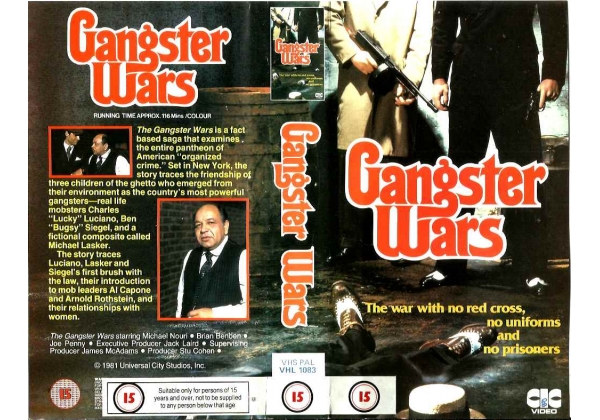 Sleeve Sypnosis:
The war with no red cross, no uniforms and no prisoners

The Gangster Wars is a fact based saga that examines the entire pantheon of American "organized crime". Set in New York, the story traces the friendship of three children from the ghetto who emerged from their enviroment as the country's most powerful gangsters-real life mobsters Charles"Lucky" Luciano, Ben "Bugsy" Siegal, and a fictional composite called Michael Lasker.

The story traces Luciano, Lasker and Siegel's first brush with the law, their introduction to the mob leaders Al Capone and Arnold Rothstein, and their relationship with women.

Or find "Gangster Wars" on VHS and DVD / BluRay at Amazon.