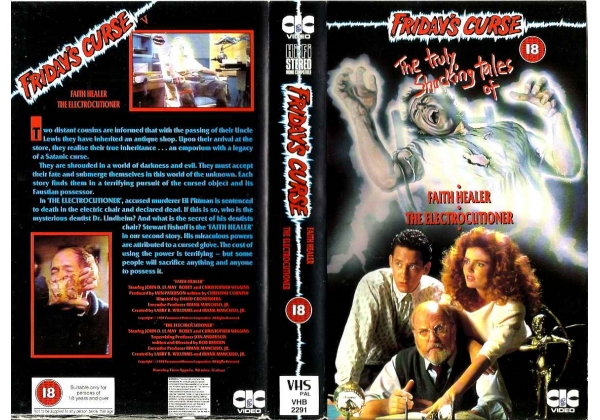 Sleeve Sypnosis:
Two distant cousins are informed that with the passing of their Uncle Lewis they have inherited antique shop. Upon their arrival at the store, they realise their true inheritance. . .an emporium with a legacy of a Statanic curse.

They are shrouded in a world of darkness and evil. They must accept their fate and submerge themselves into the world of the unknown. Each story finds them in a terrifying pursuit of the cursed object and its Faustian possessor.

In 'The Electrocutioner', accused murderer Eli Pittman is sentenced to death in the electric chair and declared dead. If this is so, who is the mysterious dentist Dr. Lindhelm? And what is the secert of his dentists chair?

Stewart Fishoff is the 'Faith Healer' in our second story. His miraculous powers are attributted to a cursed glove. The cost of using the power is terifying - but some people will sacrifice anything and anyone to posses it.