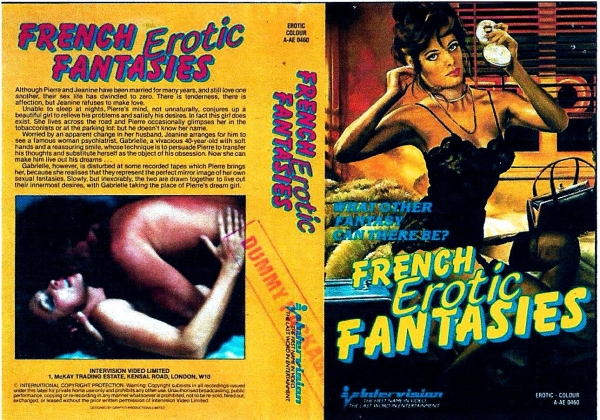 Sleeve Sypnosis:
WHAT OTHER FANTASY CAN THERE BE?
Although Pierre and Jeanine have been married for many years, and still love one another, their sex life has dwindled to zero. There is tenderness, there is affection, but Jeanine refuses to make love. Unable to sleep at nights, Pierre's mind, not unnaturally, conjures up a beautiful girl to relieve his problems and satisfy his desires. In fact this girl does exist. She lives across the road and Pierre occasionally glimpses her in the tobacconists or at the parking lot: but he doesn't know her name. Worried by an apparent change in her husband, Jeanine arranges for him to see a famous woman psychiatrist, Gabrielle, a vivacious 40-year-old with soft hands and a reassuring smile, whose technique is to persuade Pierre to transfer his thoughts and substitute herself as the object of his obsession.

Now she can make him live out his dreams... Gabrielle, however, is disturbed at some recorded tapes which Pierre rings her, because she realises that they represent the perfect mirror image of her own sexual fantasies. Slowly, but inexorably, the two are drawn together to live out their innermost desires, with Gabrielle taking the place of Pierre's dream girl.