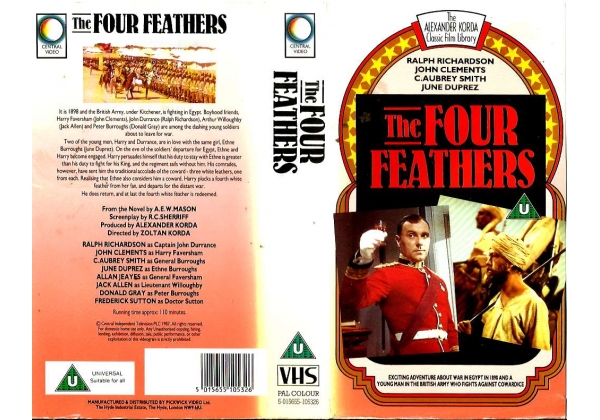 Sleeve Sypnosis:
It is 1898 and the British Army, under Kitchener, is fighting in Egypt. Boyhood friends, Hary Faversham (John Clements), John Durrance (Ralph Richardson), Arthur Willoughby (Jack Allen) and Peter Burroughs (Donald Gray) are among the dashing young soldiers about to leave for war.

Two of the young men, Harry and Durrance, are in love with the same girl, Ethne Burroughs (June Duprez). On the eve of the soldiers' departure for Egypt, Ethne and Harry become engaged. Harry persuades himself that his duty to stay with Ethne is greater than his duty to fight for his King, and regiment sails without him. His comrades however, have sent him the traditional accolade of the crowd - three white feathers, one from each. Realising that Ethne also considers him a coward, Harry plucks a fourth white feather from her fan, and departs for the distant war. He does return , and at last the fourth white feather is redeemed.