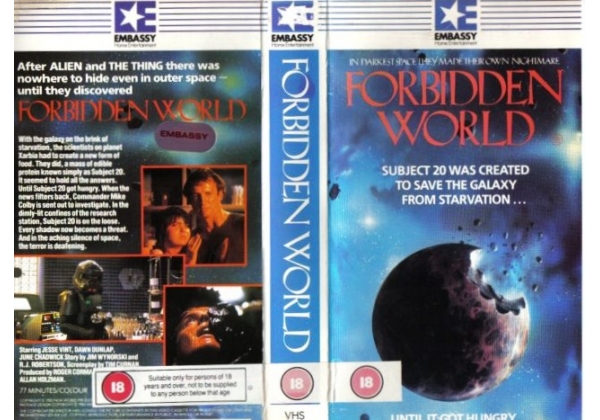 Sleeve Sypnosis:
After ALIEN and THE THING there was nowhere to hide in outer space - until they discovered FORBIDDEN WORLD. With the galaxy on the brink of starvation, the scientists on planet Xarbia had to create a new form of food. They did, a mass of edible protein known simply as Subject 20. It seemed to hold all the answers. Until Subject 20 got hungry. When news filters back, Commander Mike Colby is sent out to investigate. In the dimly-lit confines of the research station, Subject 20 is on the loose. Every shadow now becomes a threat. And in the aching silence of space, the terror is deafening.

Or find "Forbidden World" on VHS and DVD / BluRay at Amazon.