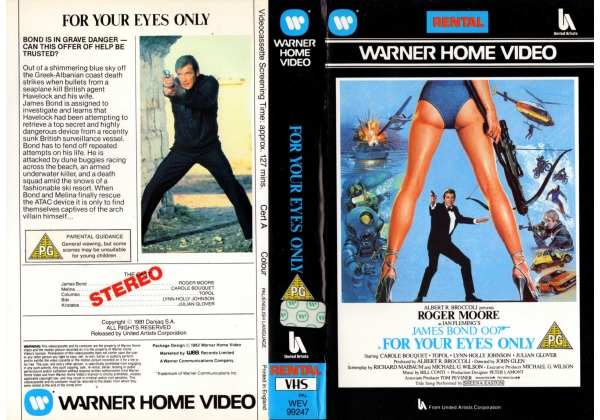 Sleeve Sypnosis:
BOND IS IN GRAVE DANGER... CAN THIS OFFER OF HELP BE TRUSTED? Out of a shimmering blue sky off the Greek-Albanian coast death strikes when bullets from a seaplane kill British agent Havelock and his wife. James Bond is assigned to investigate and learns that Havelock had been attempting to retrieve a top secret and highly dangerous device from a recently sunk British surveillance vessel. Bond has to fend off repeated attempts on his life. He is attacked by dune buggies racing across the beach, an armed underwater killer, and a death squad amid the snows of a fashionable ski resort. When Bond and Melina finally rescue the ATAC device it is only to find themselves captives of the arch villain himself...