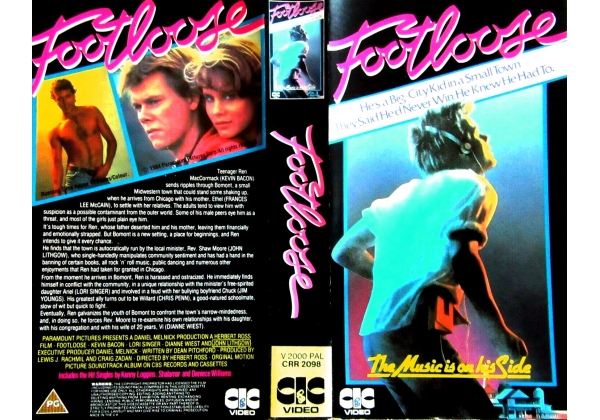 Teenager Ren MacCormack (KEVIN BACON) sends ripples through Bomont, a small Midwestern town that could stand some shaking up, when he arrives from Chicago with his mother. Ethel (FRANCES LEE McCAIN), to settle with her relatives. The adults tend to view him with suspicion as a possible contaminant from the outer world. Some of his male peers eye him as a threat, and most of the girls just plain eye him. It's tough times for Ren, whose father deserted him and his mother, leaving them financially and emotionally strapped. But Bomont is a new setting, a place for beginnings, and Ren intends to give it every chance. He finds that the town is autocratically run by the local minister, Rev. Shaw Moore (JOHN LITHGOW), who single-handedly manipulates community sentiment and has had a hand in the banning of certain books, all rock 'n' roll music, public dancing and numerous other enjoyments that Ren had taken for granted in Chicago. From the moment he arrives in Bomont, Ren is harassed and ostracized. He immediately finds himself in conflict with the community, in a unique relationship with the minister's free-spirited daughter Ariel (LORI SINGER) and involved in a feud with her bullying boyfriend Chuck (JIM YOUNGS). His greatest ally turns out to be Willard (CHRIS PENN), a good-natured schoolmate, slow of wit but quick to fight. Eventually, Ren galvanises the youth of Bomont to confront the town's narrow-mindedness, and, in doing so, he forces Rev. Moore to re-examine his own relationships with his daughter, with his congregation and with his wife of 20 years, Vi (DIANE WIEST).