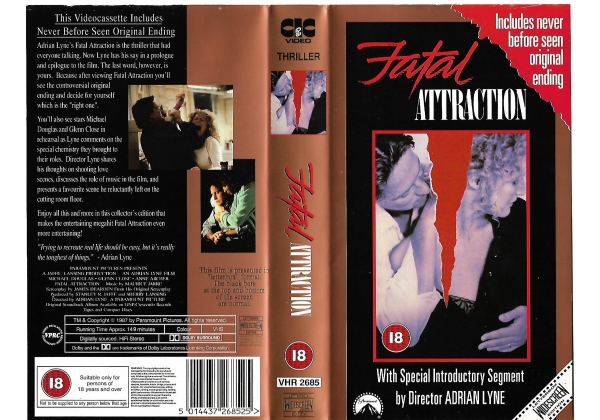 Addtional Notes:
This VHS retail version of Fatal Attraction was released in the UK in 1990 on CIC video and has the alternate ending. Alternate Ending Synopsis: Alex Forrest (Glenn Close) was originally scripted to commit suicide at the film's end by slashing her throat with the knife Dan (MIchael Douglas) had left on the counter, so as to make it appear that Dan had murdered her. After seeing her husband being taken away by police, Beth (Anne Archer) finds a revealing cassette tape that Alex sent Dan in which she threatened to commit suicide. Upon realizing Alex's intentions, Beth takes the tape to the police, which acquits Dan of the murder. The last scene shows, in flashback, Alex committing suicide by slashing her throat while listening to Madame Butterfly.