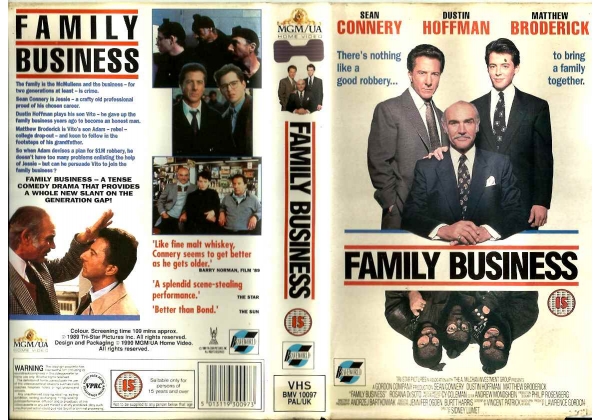 Sleeve Sypnosis:
The family is the McMullens and the business-for two generations at least - is crime. Sean Connery is Jessie - a crafty old professional proud of his chosen career.

Dustin Hoffman plays his son Vito - he gave up the family business years ago to become an honest man.

Matthew Broderick is Vito's son Adam - rebel - college drop out - and keen to follow in the footsteps of his grandfather.

So when Adam devises a plan for $1M robbery, he doesn't have too many problems enlisting the help of Jessie - but can he persuade Vito to join the family business?

FAMILY BUSINESS - A TENSE COMEDY THAT PROVIDES A WHOLE NEW SLANT ON THE GENERATION GAP!

' A splendid scene-stealing performance.' - THE STAR

'Better than Bond' - THE SUN

Or find "Family Business" on VHS and DVD / BluRay at Amazon.