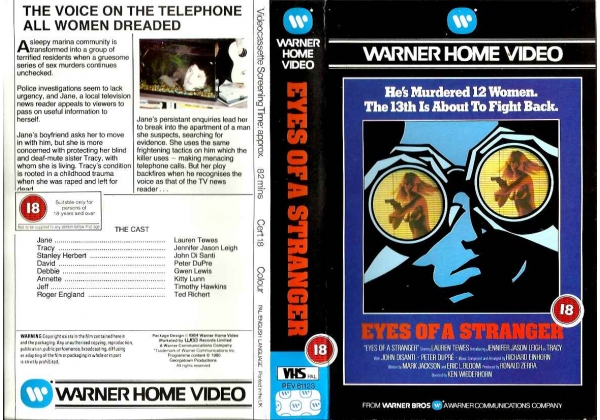 Sleeve Sypnosis:
HE'S MURDERED 12 WOMEN. THE13TH IS ABOUT TO FIGHT BACK.

THE VOICE ON THE TELEPHONE ALL WOMEN DREADED

A sleepy marina communtity is transformed into a group of terified residents when a gruesome series of sex murders continues unchecked.Police investigations seem to lack urgency, and Jane, a local television news reader appeals to viewers to pass on useful information to herself.

Jane's boyfriend asks her to move in with him, but she is more concerned with protecting her blind and deaf-mute sister Tracy, with whom she is living. Tracy's condition is rooted in a childhood trauma when she was raped and left for dead.

Jane's persistant enquiries lead her to break into the apartment of a man she suspects, searching for evidence. She uses the same frightening tactics on him which the killer uses - making menacing telephone calls. But her ploy backfires when he recognises the voice as that of the TV news reader. . .

Eyes of a Stranger

Or find "Eyes of a Stranger" on VHS and DVD / BluRay at Amazon.