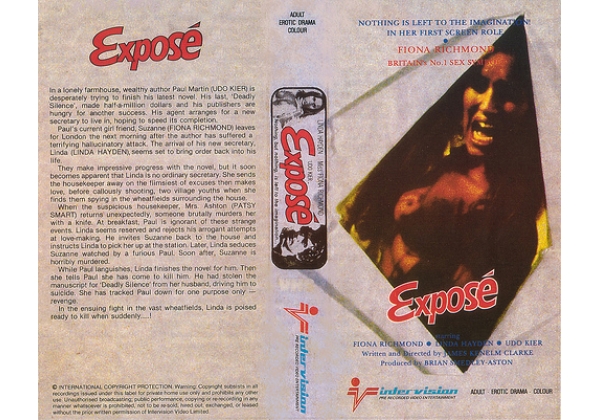 Sleeve Sypnosis:
Nothing is left to the imagination! In her first screen role, Fiona Richmond, Britain's No.1 Sex Symbol!
In a lonely farmhouse, wealthy author Paul Martin (UDO KIER) is desperately trying to finish his latest novel. His last, 'Deadly Silence', made half-a-million dollars and his publishers are hungry for another success. His agent arranges for a new secretary to live in, hoping to speed its completion. Paul's current girl friend, Suzanne (FIONA RICHMOND) leaves for London the next morning after the author has suffered a terrifying hallucinatory attack.

The arrival of his new secretary, Linda (LINDA HAYDEN), seems set to bring order back into his life. They make impressive progress with the novel, but it soon becomes apparent that Linda is no ordinary secretary. She sends the housekeeper away on the flimsiest of excuses then makes love, before callously shooting, two village youths when she finds them spying in the wheatfields surrounding the house. When the suspicious housekeeper, Mrs. Ashton (PATSY SMART) returns unexpectedly, someone brutally murders her with a knife. At breakfast, Paul is ignorant of these strange events.

Linda seems reserved and rejects his arrogant attempts at love-making. He invites Suzanne back to the house and instructs Linda to pick her up at the station. Later, Linda seduces Suzanne watched by a furious Paul. Soon after, Suzanne is horribly murdered. While Paul languishes, Linda finishes the novel for him. Then she tells Paul she has come to kill him. He has stolen the manuscript for 'Deadly Silence' from her husband, driving him to suicide.

She has tracked Paul down for one purpose only - revenge. In the ensuing fight in the vast wheatfields, Linda is poised ready to kill when suddenly... !

Or find "Expose" on VHS and DVD / BluRay at Amazon.