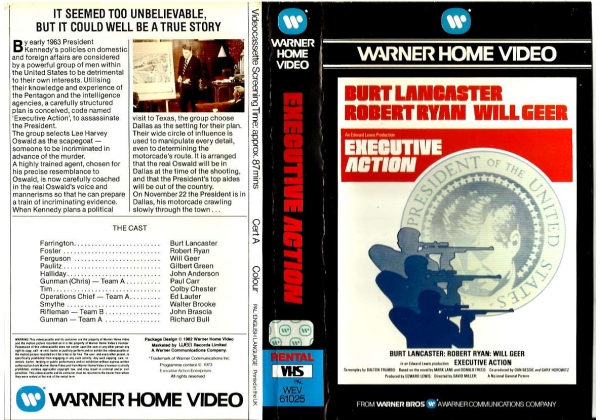 Sleeve Sypnosis:
IT SEEMED TOO UNBELIEVABLE. BUT IT COULD WELL BE A TRUE STORY

By early 1963 President Kennedy's policies on domestic and foreign affairs are considered by a powerful group of men within the United States to be detrimental to their own intrests. Utilising their knowledge and experience of the Pentagon and intelligence agencies, a carefully structured plan is conceived, code named 'Executive Action', to assassinate the President.

The group selects Lee Harvey Oswald as the scapegoat-someone to be incriminated in advance of the murder. A highly trained agent, chosen for his resemblance to Oswald, is now carefully coached in the real Oswald's voice and mannerisms so that he can prepare a trail of incriminating evidence. When Kennedy plans a political visit to Texas, the group choose Dallas as the setting for their plan.

Their wide circle of influence is used to manipulate every detail, even to determining the motorcade's route. It is arranged that the real Oswald will be in Dallas at the time of the shooting, and that the President's top aides will be out of the country.

On November 22nd the President is in Dallas, his motorcade crawling slowly through the town...

Or find "Executive Action" on VHS and DVD / BluRay at Amazon.