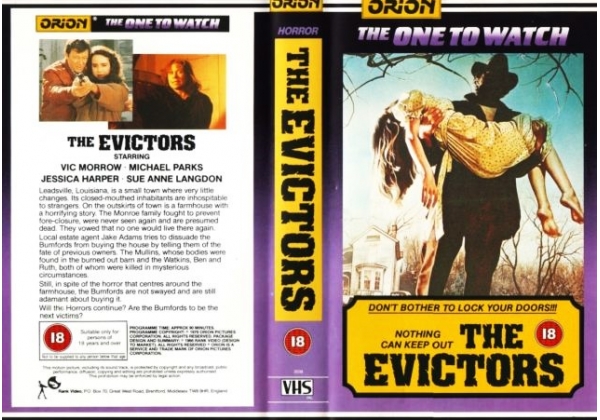 Leadsville, Louisiana, is a small town where very little changes. Its closed-mouthed inhabitants are inhospitable to strangers. On the outskirts of town is a farmhouse with a horrifying story. The Monroe family fought to prevent fore-closure, were never seen again and are presumed dead. They vowed that no one would live there again.

Local estate agent Jake Adams tries to dissuade the Bumfords from buying the house by telling them of the fate of the previous owners. The Mullins, whose bodies were found burned out in the barn and the Watkins, Ben and Ruth, both of whom were killed in mysterious circumstances.

Still, in spite of the horror that centres around the the farmhouse, the Bumfords are not swayed and are adamant about buying it.

Will the horrors continue? Are the Bumfords to be the next victims?

Or find "Evictors, The" on VHS and DVD / BluRay at Amazon.