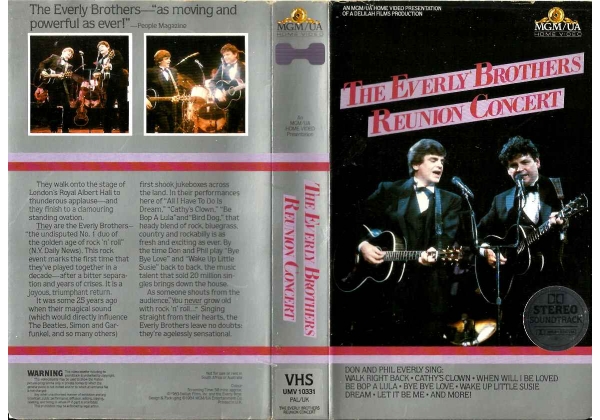 Sleeve Sypnosis:
They walk onto the stage of London's Royal Albert Hall to thunderous applause-and they finish to a clamouring standing ovation. They are the Everly Brothers-"the undisputed No. 1 duo of the golden age of rock 'n' roll" (N.Y. Daily News). This rock event marks the first time that they've played together in a decade-after a bitter separation and years of crises. It is a joyous, triumphant return. It was some 25yrs ago when their magical sound (which would directly influence The Beatles, Simon & Garfunkel, and so many others) first shook jukeboxes across the land. In their performances here of "All I Have To Do Is Dream," "Cathy's Clown" and "Bird Dog," that the heady blend of rock, bluegrass. country and rockabilly is as fresh and exciting as ever. By the time Don and Phil play "Bye Bye Love" and "Wake Up Susie" back to back, the music talent that sold 20 million singles brings down the house. As someone shouts from the audience, "You never grow old with rock 'n' roll..." Singing straight from their hearts, the Everly Brothers leave no doubts: they're are agelessly sensational.

© Delilah Films and the Everly Bros.

Or find "Everly Brother's Reunion Concert" on VHS and DVD / BluRay at Amazon.