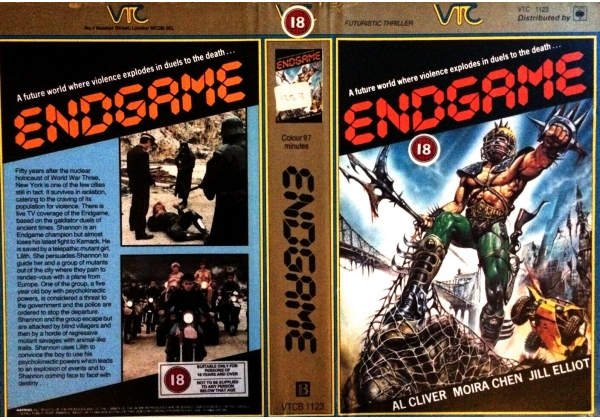 Sleeve Sypnosis:
Fifty years after the nuclear holocaust of World War Three, New York is one of the few cities still in tact . It survives in isolation, catering to the craving of its population for violence. There is live TV coverage of the Endgame, based on the gladiator duels of ancient times. Shannon is an Endgame champion but almost loses his latest fight to Karnack. He is saved by a telepathic mutant girl, Lilith. She persuades Shannon to guide her and a group of mutants out of the city where they plan to rendez-vous with a plane from Europe. One of the group, a five year old boy with psychokinectic powers, is considered a threat to the government and the police are ordered to stop the departure. Shannon and the group escape but are attacked by blind villagers and then by a horde of regressive mutant savages with animal-like traits. Shannon uses Lilith to convince the boy to use his psychokinectic powers which leads to an explosion of events and to Shannon coming face to face with destiny...

Or find "Endgame" on VHS and DVD / BluRay at Amazon.