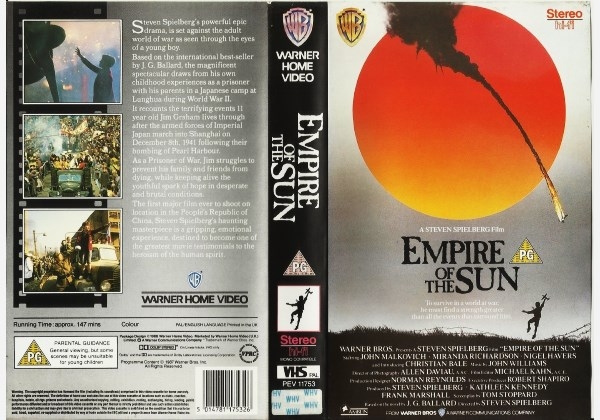 Sleeve Sypnosis:
To survive in a world at war, he must find
a strength greater than all the events that surround him.


Steven Spielberg's powerful epic drama, is set against the adult world of war as seen through the eyes of a young boy. Based on the international best-seler by J.G. Ballard, the magnificent spectacular draws from his own childhood experiences as a prisoner with his parents in a Japanese camp at Lunghua during World War II.

It recounts the terrifying events 11yr old Jim Graham lives through after the armed forces of Imperial Japan march into Shanghai on December 8th, 1941 following their bombing of Pearl Harbour. As a Prisoner of War, Jim struggles to prevent his family and friends from dying, while keeping alive the youthful spark of hope in desperate and brutal conditions.

The first major film ever to shoot on location in the People's Republic of China, Steven Spielberg's haunting masterpiece is a gripping, emotional experience, destined to become one of the greatest movie testimonials to the heroism of the human spirit.

Empire Of The Sun

Or find "Empire Of The Sun" on VHS and DVD / BluRay at Amazon.