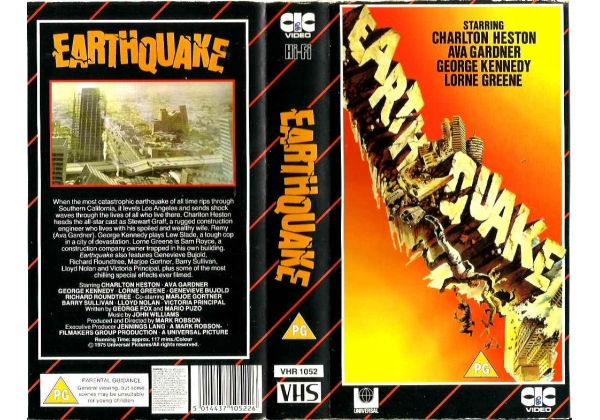 Sleeve Sypnosis:
When the most catastrophic earthquake of all time rips through Southern California, it levels Los Angeles and sends shock waves of all who live there. Charlton Heston heads the all-star cast as Stewart Graff, a rugged construction engineer with his spoiled and wealthy wife, Remy (Ava Gardner).

George Kennedy plays Lew Slade, a tough cop in a city of devastation. Lorne Greene is Sam Royce, a construction company owner trapped in his own building. Earthquake also features Genevieve Bujold, Richard Roundtree, Marjoe Gortner, Barry Sullivan, Lloyd Nolan and Victoria Principal, plus some of the most chilling special effects ever filmed.

Additional Notes:
First UK VHS retail release from 1988. This is not a Pre-Cert video.

Or find "Earthquake" on VHS and DVD / BluRay at Amazon.