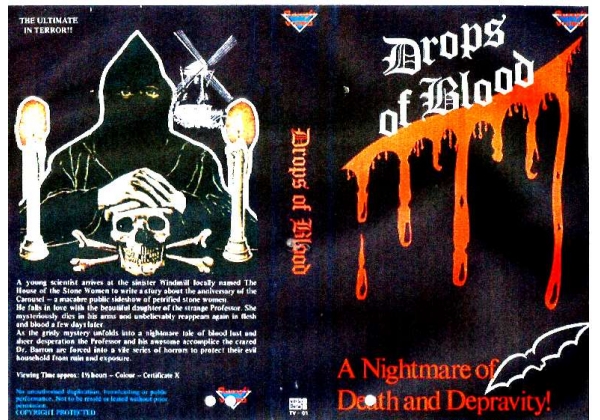 Sleeve Sypnosis:
A Nightmare of Death and Depravity!

A young scientist arrives at the sinister Windmill locally named The House of the Stone Women to write a story about the anniversary of the Carousel - a macabre public sideshow of petrified stone women. He falls in love with the beautiful daughter of the strange Professor. She mysteriously dies in his arms and unbelievably reappears in flesh and blood a few days later. As the grisly mystery unfolds into a tale of blood lust and sheer desperation the Professor and his awesome accomplice the crazed Dr. Barron are forced into a vile series of horrors to protect their evil household from ruin and exposure.

Or find "Drops of Blood" on VHS and DVD / BluRay at Amazon.