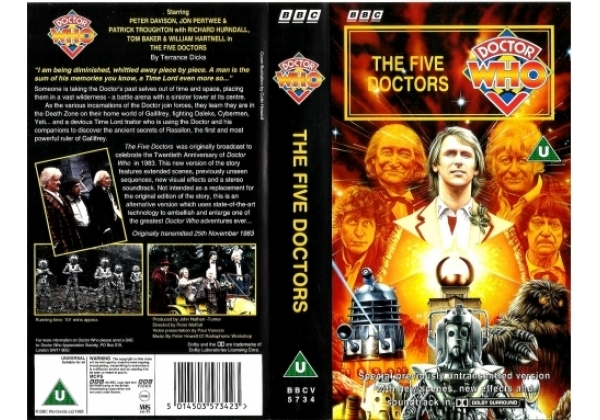 "I am being diminished, whittled away piece by piece. A man is the sum of his memories you know, a Time Lord even more so..."

Someone is taking the Doctor's past selves out of time and space, placing them in the vast wilderness - a battle arena with a sinister tower at its centre. As the various incarnations of the Doctor join forces, they learn they are in the Death Zone on their home world of Gallifrey, fighting Daleks, Cybermen, Yeti...and a devious Time Lord traitor who is using the Doctor and his companions to discover the ancient secrets of Rassilion, the first and most powerful ruler of Gallifrey.

The Five Doctors was originally broadcast to celebrate the Twenteith Anniversary of Doctor Who in 1983. This new version of the story features extended scenes, previously unseen sequences, new visual effects and a stereo soundtrack. Not intended as a replacement for the original edition of the story, this is an alternative version which uses state-of-the-art technology to embellish and enlarge one of the greatest Doctor Who adventures ever...

Or find "Dr Who: The Five Doctors (special edition)" on VHS and DVD / BluRay at Amazon.