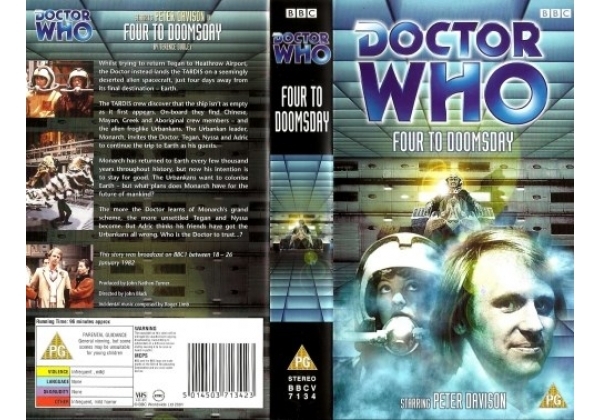 Sleeve Sypnosis:
Whilst trying to return Tegan to Heathrow Airport, the Doctor instead lands the TARDIS on a seemingly deserted alien spacecraft, just four days away from its final destination- Earth.

The TARDIS crew discover that the ship isn't empty as it first appears. On-board they find Chinese, Mayan, Greek and Aboriginal crew members - and the alien froglike Urbankans. The Urbankan leader, Monarch, invites the Doctor,Tegan, Nyssa and Adric to continue the trip to Earth as guests.

Monarch has returned to Earth every few thousand years throughout history, but now his intention is to stay for good. The Urbankans want to colonise Earth - but what plans does Monarch have for the future of humankind?

The more the Doctor learns of Monarch's grand scheme, the more unsettled Tegan and Nyssa become. But Adric thinks his friends have got the Urbankans all wrong. Who is the Doctor to trust...?

Dr Who: Four To Doomsday

Or find "Dr Who: Four To Doomsday" on VHS and DVD / BluRay at Amazon.