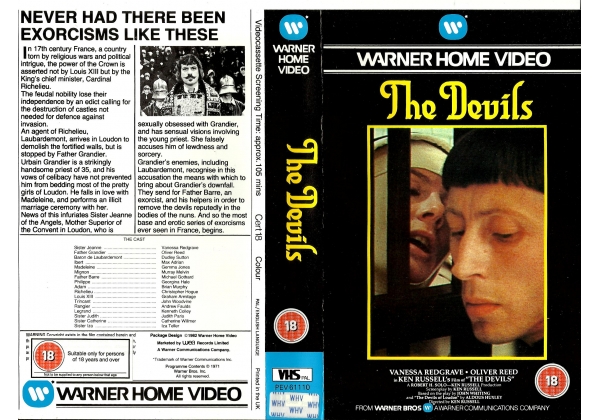 Sleeve Sypnosis:
NEVER HAD THERE BEEN EXORCISMS LIKE THESE

In 17th century France, country torn by religious wars and political intrigue, the power of the Crown is asserted not by Louis XIII but by the King's chief minister, Cardinal Richelieu. The fedual nobility lose their independence by an edict calling for the destruction of castles not needed for defence against invasion, An agent of Richelieu, Laubardemont, arrives in London to demolish the fortified walls, but is stopped by Father Grandier. Urbain Grandier is a strikingly handsome priest of 35, and his vows of celibacy have not prevented him from bedding most of the pretty girls of Loudon. He falls in love with Madeleine, and preforms an illict marriage ceremony with her. News of this infuriates Sister Jeanne of the Angeles, Mother Superior of the Convent in Loudon, who is sexually obsessed with Grandier, and has sensual visions involving the young priest. She falsely accuses him of lewdness and sorcery. Grandier's enemies, including Laubardermont, recognise in this accusation the means with which to bring about Grandier's downfall. They send for Father Barre, an exorcist, and his helpers in order to remove the devils reputedly in the bodies of the nuns. And so the most base and erotic series of exorcisms ever seen in France, begins.

Or find "Devils, The" on VHS and DVD / BluRay at Amazon.