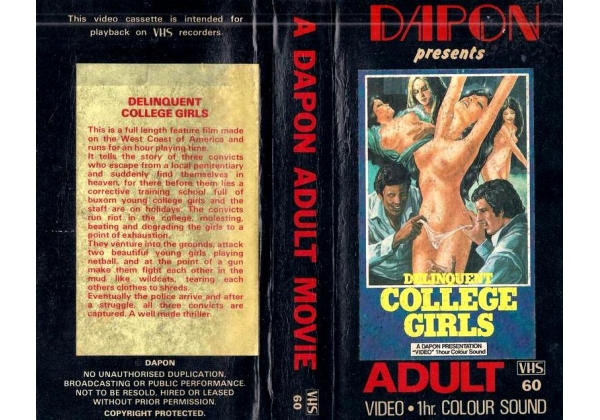 Sleeve Sypnosis:
DELINQUENT COLLEGE GIRLS. This is a full length feature film made on the West Coast of America and runs for an hour playing time. It tells the story of three convicts who escape from a local penitentiary and suddenly find themselves in heaven, for there before them lies a corrective training school full of buxom young college girls and the staff are on holidays. The convicts run riot in the college, molesting, beating and degrading the girls to a point of exhaustion. They venture into the grounds, attack two beautiful young girls playing netball, and at the point of a gun make them fight each other in the mud like wildcats, tearing each other's clothes to shreds. Eventually the police arrive and after a struggle, all three convicts are captured. A well made thriller.

Or find "Delinquent College Girls" on VHS and DVD / BluRay at Amazon.