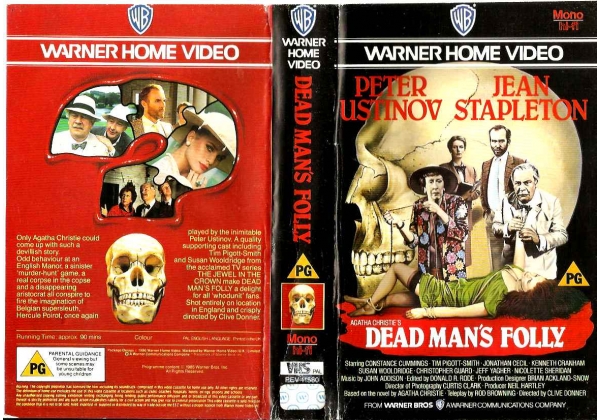 Sleeve Sypnosis:
Only Agatha Christie could come up with such a devilish story. Odd behaviour at an English Manor, a sinister 'murder hunt' game, a real corpse in the copse and a disappearing aristocrat all conspire to fire the imagination of Belgian supersleuth, Hercule Poirot, once again played by the inimitable Peter Ustinov. A quality supporting cast including Tim Pigott-Smith and Susan Wooldridge from the acclaimed TV series THE JEWEL IN THE CROWN make DEAD MAN'S FOLLY a delight for all 'whodunit' fans. Shot entirely on location in England and crisply directed by Clive Donner.

Or find "Dead Man's Folly" on VHS and DVD / BluRay at Amazon.