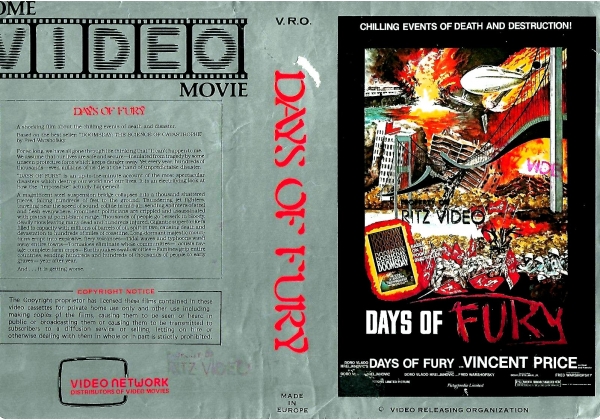 Sleeve Sypnosis:
CHILLING EVENTS OF DEATH AND DESTRUCTION!
A shocking film about the chilling events of death and disaster. Based on the best seller: "DOOMSDAY: THE SCIENCE OF CATASTROPHE" by Fred Warshofsky. For so long, we have all gone through life thinking that "It can't happen to me. We assume that our lives are safe and secure - insulated from tragedy by some unseen protective force which keeps danger away. Yet every year, hundreds of thousands - even millions of us die at the hand of unpredictable disaster. "DAYS OF FURY" is an up-to-the-minute account of the most spectacular disasters which destroy our world and our lives. It is an electrifying look at how the "impossible" actually happened! A magnificent steel suspension bridge collapses into a thousand shattered pieces, falling hundreds of feet to the ground. Thundering jet fighters, traveling near the speed of sound, collide in mid-air, sending splinters of steel and flesh everywhere. Prominent politicians are crippled and assassinated with pistols at point-blank range. Thousands of people go berserk in bloody, deadly riots leaving many dead and hundreds injured. Gigantic supertankers filled to capacity with millions of barrels of oil, split in two, causing death and devastation to hundreds of miles of coastline. Long-dormant majestic mountains erupt into explosive, fiery volcanoes-Tidal waves and typhoons wash away entire towns-Tornadoes eliminate whole communities-Locusts ravage complete farm crops-Earthquakes swallow cities-Famines grip entire countries, sending thousands and hundreds of thousands of people to early graves-year after year. And... it is getting worse.

Or find "Days of Fury" on VHS and DVD / BluRay at Amazon.