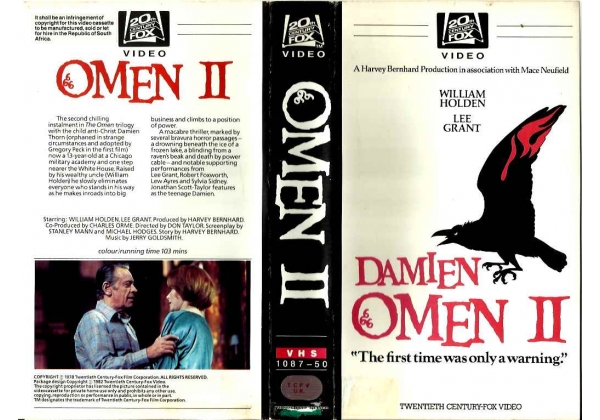 Sleeve Sypnosis:
"The first time was only a warning."

The second chilling instalment in The Omen trilogy with the child anti-Christ Damien Thorn (orphaned in strange circumstances and adopted by Gregory Peck in the first film) now 13-year-old at a Chicago military academy and one step nearer to the White House. Raised by his wealthy uncle (William Holden) he slowly eliminates everyone who stands in his way as he makes inroads into big business and climbs to a position of power.

A macabre thriller, marked by several bravura horror passages-a drowning beneath the ice of a frozen lake, a blinding from a raven's beak and death by power cable-and notable supporting performances from Lee Grant, Robert Foxworth, Lew Ayres and Slyvia Sidney. Jonathan Scott-Taylor features as the teenage Damien.

Or find "Damien: Omen II" on VHS and DVD / BluRay at Amazon.