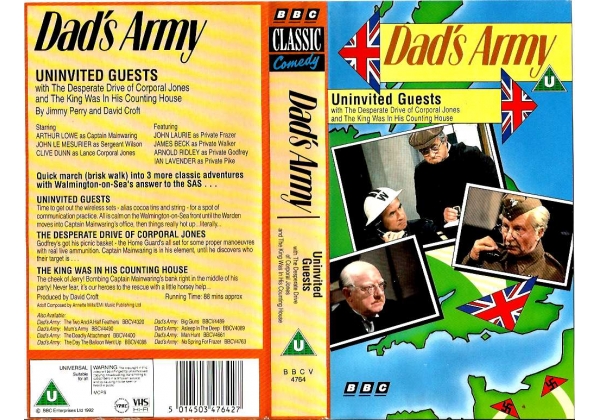 Time to get out the wireless sets - alias cocoa tins and string - for a spot of communication practice. All is calm on the Walmington-on-Sea front until the Warden moves into Captain Mainwaring's office, then things really hot up...literally...

THE DESPERATE DRIVE OF CORPORAL JONES

Godfrey's got his picnic basket - Home Guard's all set for some proper manoeuvers with real live ammunition. Captain Mainwaring is in his element, until he discovers who their target is...

THE KING WAS IN HIS COUNTING ROOM

The cheek of Jerry! Bombing Captain Mainwaring's bank right in the middle of his party! Never fear, it's our heroes to the rescue with a little horsey help..

Or find "Dad's Army: Uninvited Guests" on VHS and DVD / BluRay at Amazon.