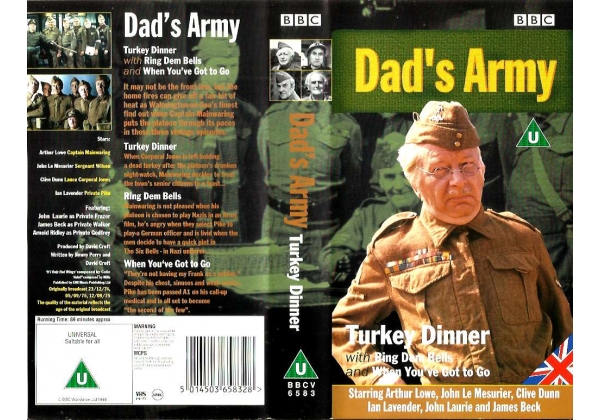 Sleeve Sypnosis:
It may not be the front line, but the home fires can give off a fair bit of heat as Walmington-on-Sea's finest find out when Captain Mainwaring puts the platoon through its paces in these three vintage episodes.

When Corporal Jones is left holding a dead turkey after the platoon's drunken night-watch, Mainwaring decides to treat the town's senior citizens to a feat ...

mainwaring is not pleased when his platoon is chosen to play Nazis in an Army film, he's angry when they select Pike to play a German officer and is livid when the men decide to have a quick pint in The Six Bells - in Nazi uniform.

When You've Got to Go

"They're not having my Frank as a soldier."
Despite his chest, sinuses and weak ankles, Pike has been passed A1 on his call-up medical and is set to become "the second of the few".

Or find "Dad's Army: Turkey Dinner" on VHS and DVD / BluRay at Amazon.