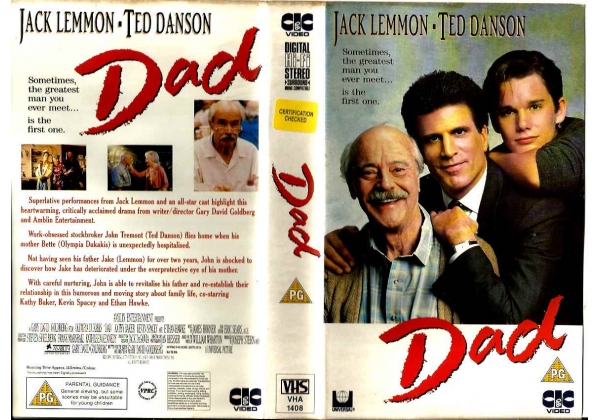 Sleeve Sypnosis:
Sometimes, the greatest man you ever meet...is the first one.

Work-obsessed stockbroker John Tremont (Ted Danson) flies home when his mother Bette (Olympia Dukakis) is unexpectedly hospitalised. Not having seen his father Jake (Jack Lemmon) for over two yrs, John is shocked to discover how Jake has deteriorated under the overprotective eye of his mother.

With careful nurturing, John is able to revitalise his father and re-establish their relationship in this humouous and moving story about family life co-starring Kathy Baker, Kevin Spacey and Ethan Hawke.

Or find "Dad" on VHS and DVD / BluRay at Amazon.